Construction of Scottish Water's flagship Shieldhall Tunnel project, in the south of Glasgow, the biggest waste water tunnel ever to be built in Scotland, reached Queen's Park at the end of August.

The £100m tunnel, which will enable Scottish Water to improve water quality in the River Clyde and its tributaries and tackle flooding in various parts of the south of Glasgow area, will, at 3.1 miles long, be five times longer than the Clyde Tunnel.

Engineers working on the 1000 tonne, 180-metre-long tunnel boring machine (TBM), started construction of the tunnel when the TBM was launched last July and are expected to complete the main tunnelling works later this year. The TBM is tunnelling at a speed of about two millimetres per minute through challenging ground which includes boulders, clay, hard sandstone, glacial tills and old coal workings.

The first half of the tunnel construction has taken it under Bellahouston Park, the Glasgow to Paisley railway line and the M77. The route of the tunnel was chosen to maximise the use of parkland and minimise disruption. As it inches its way along the route, preparatory work is progressing at Queens Park where work is continuing on the construction of an exit shaft for the TBM and a smaller tunnel from that shaft to another shaft which will use a newly-installed flume to connect the tunnel to the existing network.

The tunnel, which at 4.7 metres in diameter will be big enough to fit a double decker bus inside, is a key part of Scottish Water's £250m, five-year programme of work, launched in 2013, to improve river water quality and the natural environment. The programme is the biggest investment in the Greater Glasgow area's waste water infrastructure in more than a century. 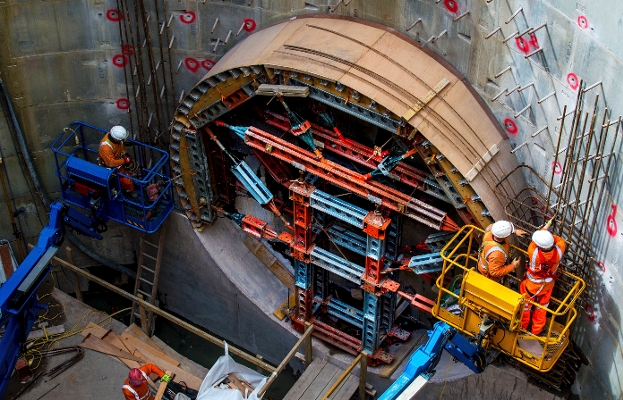