Scotland's biggest sewer superstructure has become operational in a feat of engineering hailed as "extraordinary" by Environment Secretary Roseanna Cunningham. The tunnel is the flagship project in Scottish Water's investment in the Glasgow area's waste water infrastructure, the biggest since Victorian times, and stretches for 3.1 miles from Craigton to Queen's Park via Bellahouston Park and Pollok Park.

It was constructed over almost two years by a team of more than 100 workers, from countries across the world, using a state-of-the-art tunnel boring machine (TBM) named Daisy the Driller by a local schoolboy, which weighed 1000 tonnes and was longer than 14 buses.

The tunnel will alleviate pressure on the existing waste water network with 90,000 cubic metres of extra storm water storage, which is the equivalent of 36 Olympic-sized swimming pools.

It will also reduce the risk of flooding in Aikenhead Road and Curtis Avenue in Mount Florida and Robslee Drive, Robslee Road, Robslee Crescent and Orchard Park Avenue in Giffnock.

The tunnel will substantially reduce the amount and frequency of waste water discharged from a number of Combined Sewer Overflows (CSOs) and enable more than 90% of what was discharged at these CSOs to be treated at Shieldhall Waste Water Treatment Works before being discharged there. 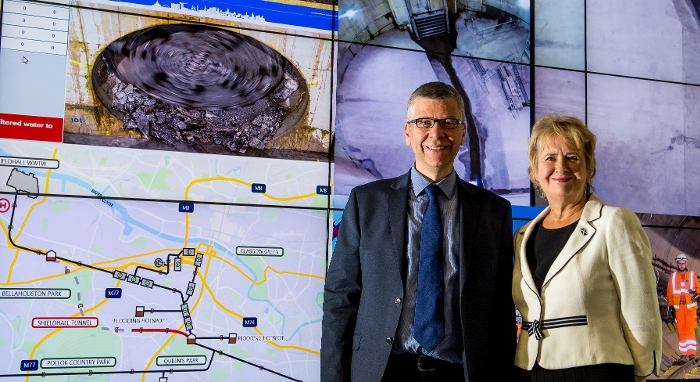 Environment Secretary Roseanna Cunningham and Scottish Water Director of Capital Investment Mark Dickson in the Scottish Water control room where the country's vast network of pipes and sewers are managed and monitored around the clock.

Ms Cunningham said: "The strategic importance of the Shieldhall Tunnel as part of the ongoing investment across Glasgow by Scottish Water cannot be understated. It's a fantastic example of the capital investment programme delivering real long-term benefits for communities to reduce flooding, help deal with the impact of climate change and improve the environment".

For further information on this project, visit the Scottish Water website - https://www.scottishwater.co.uk/about-us/media-centre/latest-news/environment-secretary-opens-shieldhall-tunnel-in-glasgow